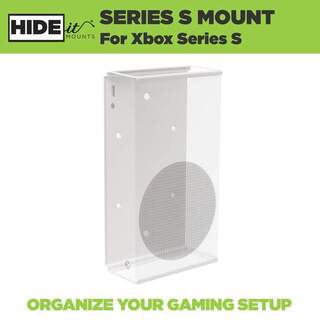 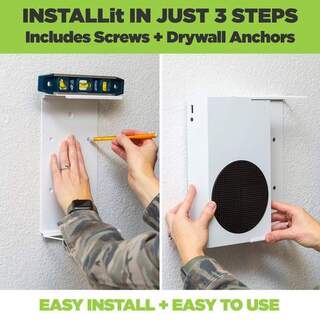 NOT COMPATIBLE WITH: Original Xbox One, Xbox One S, Xbox One X or Xbox Series X

Is this the right Xbox wall mount for my Xbox? This Xbox mount was designed for the Xbox Series S console. Older Xbox consoles, such as the Xbox One consoles, will require a different HIDEit Mount.

What are the screws for? The drywall anchors and screws are for wall mounting your Xbox Series S console, while the included flat M4 and M6 screws are for VESA mounting.

Will this hold up in an earthquake? Of course! Our Xbox wall mounts come with drywall anchors rated for 25lbs each, much more than the weight of the console! Plus, with over 10 years in the industry, we've never had a mount fall.

I thought consoles couldn't go vertical? This was only an issue with the Original Xbox One disc drive (digital content is fine). All other Xbox consoles can be used while vertical, so HIDEit or SHOWit!